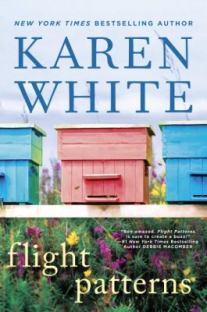 A family tragedy drives a wedge between two sisters and keeps them estranged for 10 years. But one sister, Georgia, is forced to return home, due to her job as an antiques expert. After a client seeks a price on a set of china, whose pattern Georgia is sure she has seen before, in the attic of her family’s house, her boss convinces her to drive back to her childhood home. With the story set in Apalachicola, Florida, the author focuses on how to mend broken ties within families, as well as the impact of childhood trauma on life as an adult. The novel is told in the different character’s perspectives, and switches between Georgia, her sister Maisy, and their mother, Birdy, who does not speak but instead sings softly, due to her mental instability. The chapters are prefaced with quotes about bees, as their grandfather is a beekeeper, who believes that wisdom can be gained from studying the patterns of the bees. The twist at the end turns conventional behavior upside down, and the reader is forced to consider the choices made by several of the characters. For fans of Jodi Picoult, and Kristin Hannah.