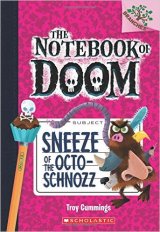 For series fans, we have added some new Juvenile titles. The Notebook of Doom series latest title is #11, Sneeze of the Octo-Schnozz. For fans of I Survived, we now have The Bombing of Pearl Harbor, 1941; Hurricane Katrina, 2005; The Eruption of Mont St. Helens, 1980 and The Attacks of September 11, 2001. And for our youngest fans, Jane Yolen has added How Do Dinosaurs Choose Their Pets?, 17 years after the very first title in the picture book series, How do Dinosaurs Say Goodnight?