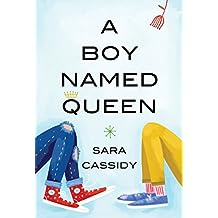 At only 96 pages, this short novel clearly sends the message to be accepting of others.  ‘Queen’ looks at gender roles, bullying in schools, acceptance and not being afraid to be who you are.  There is a new student in Evelyn’s 5th grade class. He immediately causes a stir when introduced. His name is Queen.  Not even the teacher is sure how to react. Evelyn is from a strict home who does things by routine. She realizes that she and Queen share some commonalities and, more importantly, like each other. There are some mean boys in class who tease Queen and Evelyn gets the fallout from that. Will she decide not to be friends with him to ensure she isn’t the bullies next target?  Evelyn recognizes that she doesn’t want to back down. She likes Queen too much to lose his friendship. The novel reads like a short vignette that teaches tolerance and celebrating our differences. Grades 2-6.

The 3/28 American Libraries Direct has an article that lists 9 blogs on the use of new educational methods, most using technology as the teaching tool. Among the blogs discussed are Tech Tips 411, which explains hyperblogs, an interactive way for students to showcase their research on a particular topic; The Daring Librarian, who blogs about using Instagram to showcase book recommendations by her students; and The Innovative Educator, who references an article on the teen brain. For more information, here is the list of blogs.

The Other F-Word by Natasha Friend is a humorous and heartfelt novel about two teenagers, Milo and Hollis, who were conceived via in vitro fertilization. Although they share the same sperm donor they live states apart and have only met once because of the efforts of Hollis’s late mother. Milo has two g

reat moms, but he’s never known what it’s like to have a dad. When Milo’s doctor suggests asking his biological father to undergo genetic testing to shed some light on Milo’s extreme allergies, he realizes this is a golden opportunity to find the man he’s always wondered about. Hollis isn’t so sure but when Milo contacts her to seek her help in locating their donor they form an instant friendship and bond and she begrudgingly agrees. Hollis’s mom Leigh hasn’t been the same since her other mom, Pam, passed away seven years ago. But suddenly, Leigh seems happy—giddy, even—by the thought of reconnecting with Hollis’s half-brother Milo.

I don’t want to give too much away but they eventually find out that they have three other half-siblings and the relationships that they all form are heartwarming. I would recommend this book to anyone, it adds humor to a serious topic and brings to light what modern families truly look like in our current times.

Just hitting the New York Times Best Sellers list is The Stranger in the Woods: The Extraordinary Story of the Last True Hermit by Michael Finkel. This quick read tells the story of Christopher Knight who in 1986, at the age of 21, left his home and disappeared into the woods of Maine. Knight spent 27 years in solitude, and with one or two exceptions, did not interact with another human being until his arrest in 2013 for stealing food from the cafeteria of a nearby camp. In just 200 absorbing pages, the author provides insight into Knight’s mindset and motivations for retreating from society, and the effect his stay in the forest had on him, his family, and those living in the cabins he broke into, time and time again, to obtain the supplies he needed to survive. I can’t see myself going off to live in the woods or willingly facing the many dangers of living outdoors (almost thirty Maine winters…no, thank you!). However, Knight’s story has me convinced that there is an appeal to, and benefit of, regularly spending at the very least a few hours, if not days, alone and unplugged, allowing oneself time to let the mind wander.

Kimberly McCreight has written a fast paced mystery combining murder, infidelity, and the issues between parents and their children. When the body of a newborn is found near a college campus, reporter Molly Sanderson is assigned the story for the town paper. Although she had suffered a miscarriage a few years after having Ella, her daughter, Molly is learning to put the past behind her and pick up the pieces of her life. After all, she has a loving husband, daughter Ella, and her friends in her life for support. When Molly links the baby’s death to the death of a young college boy found years ago in the same area, it causes havoc among the town residents. McCreight has created well developed characters, and the dialogue moves the novel right along. Lots of twists and turns keep the reader’s interest. I would definitely recommend it for mystery fans.