Still Life With Tornado by A.S. King (who is an author that I love) is a book that left me with mixed feelings.

Sarah is a sixteen year-old girl who lives with her parents in Philadelphia (her older brother has inexplicably been out of touch with them for years). But with this book nothing is as it seems. There is abuse, bullying, and obvious mental illness.

Abuse and family are not new topics in YA. The genre is filled to the brim with many different books that deal with one or both. But King doesn’t play by the usual rules. Still Life with Tornado is full of strangeness from the very first chapter. Sarah is experiencing an existential crisis – she has stopped going to school (and won’t explain why) and she’s obsessed with the lack of originality in the world around her. She wanders around each day, meeting various past and future Sarah’s (ten year old Sarah, twenty-three year old Sarah, etc.). Her point-of-view can be a bit exhausting at times because her tone is that of a petulant ten-year-old – but maybe that is the point. If this was any other author, I would probably have assumed the book was all about internal teen angsting. But, of course, it soon becomes apparent that this is not really a book about Sarah at all. Or, rather, it’s about so much more than her. It’s ab 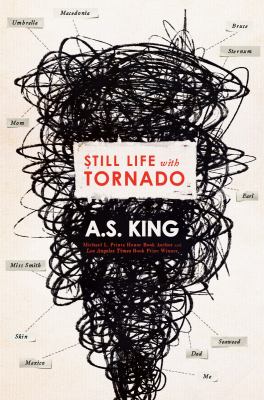 Gradually, all of this is revealed. The author carefully peels back layers until a story about a teenage girl on a quest for art and originality becomes a dark, haunting tale of relationships and sad secrets left festering in the closet for years.

This book may frustrate you to read, I certainly had some trouble with it, but once you get the entire story you can appreciate what King is trying to convey.