Kwame Alexander is one my favorite YA authors. His book Solo that came out last year is just another gem in his collection!

Blade never asked for a life of the rich and famous. In fact, he’d give anything not to be the son of Rutherford Morrison, a washed-up rock star and drug addict with delusions of a comeback. Or to no longer be part of a family known most for lost potential, failure, and tragedy. The one true light is his girlfriend, Chapel, but her parents have forbidden their relationship, assuming—like many—that Blade will become just like his father.

In reality, the only thing Blade has in common with Rutherford is the music that lives inside them. But not even the songs that flow through Blade’s soul are enough when he’s faced with two unimaginable realities: the threat of losing Chapel forever, and the revelation of a long-held family secret, one that leaves him questioning everything he thought was true. All that remains is a letter and a ticket to Ghana—both of which could bring Blade the freedom and love he’s been searching for, or leave him feeling even more adrift. 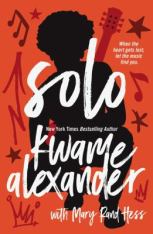 This writing is incredible and FUN and it is filled with MUSIC which is perfect for this Summer’s Libraries Rock! theme.