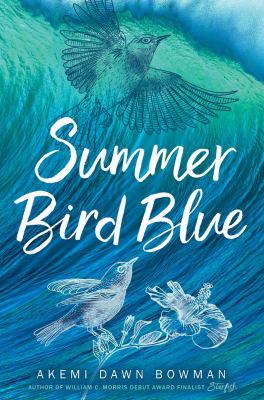 Akemi Dawn Bowen’s newest – Summer Bird Blue – is not an easy read. Similarly to her last YA novel, there are unlikable characters. Most unlikable is the main character, Rumi who has just lost her younger sister in a car accident in which her and her mother survived. On top of dealing with the loss of her sister she must cope with new surroundings – her mother has sent her to live with her Aunt in Hawaii while she grieves. But Rumi is not normal (although she isn’t quite sure why) and she can’t stop thinking about her sister and her mother. Her sister who was the only person on earth who could tolerate her and her mother who abandoned her in her time of need and grieving. Rumi feels like she needs to finish what her and her sister started: they were a song writing duo and were writing a song in the car when the accident occurred. But her spiraling thoughts about her mother wishing that she had died in the accident instead of her sister keep her from accessing her feelings and her creativity.

Although she is a difficult character, Rumi is relatable if you have ever suffered such a terrible loss. When you find out more about what makes her who she is you begin to understand her attitude and sympathize with her. I PROMISE that this book is worth the payoff. When she eventually finishes the lyrics to the song her and her sister had begun it is beautiful and heartbreaking. I have found myself re-reading the song many times in the months since I have read this book. Please give it a read!