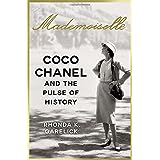 As I was entering the NY Review of books tonight after flicking through it quickly, I noticed that a new biography of Coco Chanel has been published and will be out tomorrow. Written by Rhonda K. Garelick, it is titled “Mademoiselle : Coco Chanel and the Pulse of History“. I have always been fascinated by her and how she became such a huge hit in the fashion world. The article features some interesting tidbits about her that I didn’t know. Gabrielle Chanel (her real name) had a horrible childhood, and was sent to a religious orphanage, where she learned to sew. She began work as a seamstress, moved on to become a courtesan, and later fell in love with an English businessman who began to advise her about her business. He later married and was killed shortly after, which the author attributes as being responsible for Chanel’s subsequent cynicism. She had an affair with a German officer during the war, and actively collaborated with the Germans.

The NYPL catalog lists more than 85 books about Coco Chanel, and this is one more for the collection. I plan on reading it and will update this post.

This book begins with Williams’ first big success, The Glass Menagerie, which I happened to act in in a high school production. So I have learned an enormous amount of background to the play, which I’m sure as teenagers we weren’t interested in. (The mother, Amanda, was modeled on his mother.) The play was hugely popular, with Laurette Taylor coming out of semi-retirement (alcohol) to star as Amanda.  Williams upbringing was total repression of any sexual impulses or thoughts. He was a virgin until 27 and his late twenties and throughout his thirties, his mission in life was to unlearn repression. The book is about 600 pages, so stay tuned.

This World War II novel by Anthony Doerr focuses on the lives of two families:  one German and the other French.  Werner and Jutt, his sister, are orphans whose father died in a mining accident.   Werner is a resourceful boy who has develops an ability to work with radios.  He can build them out of discarded remnants and is equally adept at fixing them as well.  Marie is blind.  She lives in Paris with her father who works at the local museum.  He is the keeper of the keys, who makes and maintains all the keys for the museum.  He is a skilled model maker who constructs miniatures so that Marie can navigate her way around Paris and then Saint Malo.

The story spans 1939 to 1945 and gives us a post-script as to what happens to the main characters after the war.  Eventually through a series of circumstances Marie and Werner meet in the seaside town of Saint Malo in Brittany, where Marie is living with her great-uncle, and Werner is stationed with a small group of young men whose job it is to find illegal, hidden radio transmitters.

It took me a while to get into the book mainly because Doerr’s chapters are very, very short.  He alternates his narrative between Marie and Werner and jumps from the beginning of the war to 1944 and back again.  Just when you get into the story, he jumps back to a character or to another time period.  But as I got really into the book, I couldn’t put it down.  The lives that Marie and Werner and their families are forced to live because of the war are tragic.  They are two children, among so many others, who lived through a brutal nightmare.

If you like Woody Allen or are a real fan of his work, I recommend two new DVDs that we just added to our collection.

“Paris-Manhattan” is set in Paris; the Manhattan part of the title references Woody Allen’s movie “Manhattan.”  Alice Taglioni plays a young woman who eventually takes over her father’s pharmacy.  Everything problem in life, in her opinion, can be solved by watching a Woody Allen movie.  To say she is obsessed with him and his movies is putting it mildly.  When she talks to him, the voice of Allen responds.  Eventually, she even gets to meet him.  This is a light-hearted romantic farce that is easy viewing.

“Fading Gigolo” written, directed, and starring John Turturro is set in NYC.  Turturro is a middle-aged man who works part-time as a florist.  His good friend played by Woody Allen recently had to close his book store.  Both men need additional income.  Allen and Turturro eventually become business partners.  The business they create is setting up Turturro as a gigolo.  The banter between Turturro and Allen is very funny, but also very New York.  When a Hasidic woman and the her community in Williamsburg become part of the plot, Allen is eventually arrested by the local Hasidic police force and must account for himself before a religious court.  Included in the cast are Sharon Stone, Sofia Vergera, and Liev Schreiber who all do justice to their roles.

I’m on a roll with biographies of unknowns. This one is by Caitlin Doughty and tells of her working at a mortuary that does cremations. It’s how she learns the job, the people she works with, and of course the cadavers. I’m finding it totally interesting and informative.