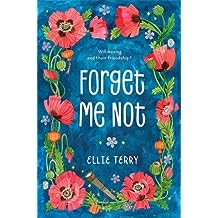 ‘Forget Me Not’ by Ellie Terry is a middle-grade novel in verse starring Callie June. As the story begins, Callie is starting her 10th school. She lives with her mother who has a hard time putting down roots. Callie moves to a new town or new state every time her mother breaks up with her latest boyfriend. Considering the instability she endures, Callie is well-adjusted. She also has Tourette’s Syndrome. As the reader can anticipate, there are mean kids in her new school who make fun of her tics. She is lucky to make a friend her very first day. Jinsong is a boy who likes Callie from their first meeting. He is afraid of his friends giving him a hard time if they find out he likes her. This conflict is realistically described and Callie is hurt that her friend has let her down. The author reveals that she has TS, too.